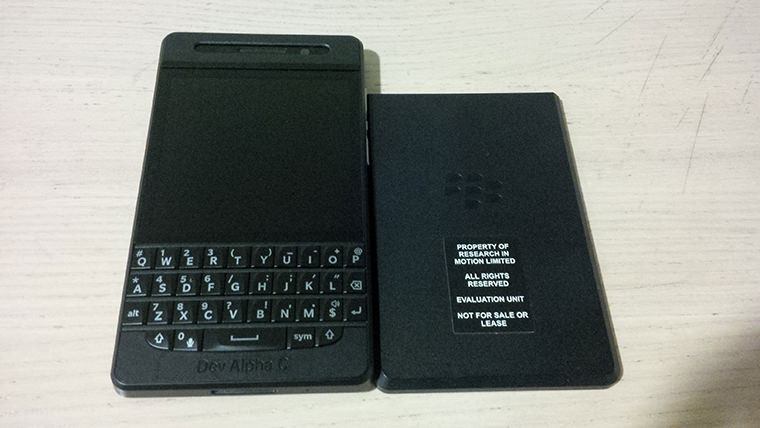 I was lucky enough to be one of 1,500 developers to receive the Developer Alpha C device and I must say that I really (REALLY) like it.

Let me start off by just giving a quick background of myself. My last device was the BlackBerry Bold 9930, which I used for close to two years, and before that, the BlackBerry Bold 9650. That being said, it is quite obvious that I very much enjoy the physical QWERTY keyboard. What is most interesting though, is that I was also fortunate enough to have received the Developer Alpha B device a few months back. I was instantly sold on it and purchased the BlackBerry Z10 the day it came out on Verizon. I have been using it as my daily driver ever since so I can say that I have gotten very used to the BB10 operating system and have taken quite well to the extra screen real estate as the Z10 was my FIRST all-touch screen phone. 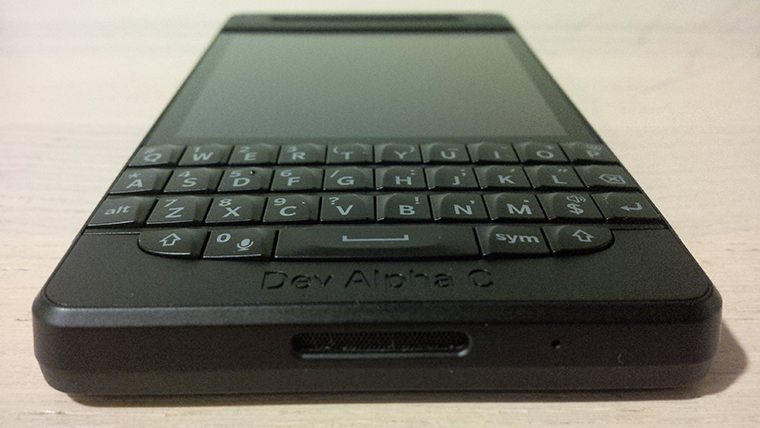 I figured that a good place to start would be with the one thing that differentiates this device from everything else on the market; the keyboard. I was a bit worried at first that they straightened out the 'smile' keyboard and got rid of the trackpad in addition to other main physical buttons. I am happy to report that I am now VERY GLAD that they did this. Simply put, the extra screen real estate gained from this move, is both needed, and well appreciated having came from a Bold 9930. The keyboard looks and feels less 'glossy' than the 9900/30′s keyboard, it feels a bit more gripped, but in a GOOD way. Also, the buttons are much easier to press, while still maintaining the right amount of tactile feedback.

The straight keys are much preferred, as every key is now the exact same size, and that is needed for better muscle memory. I can guarantee you that you will be typing faster on this phone than you could have ever done with the 9900/30, given the word prediction/correction, and greatly improved keyboard. Also, each key is a tad bit wider than on the 9900/30, and feels great! I honestly cannot possibly think of a way to improve this physical keyboard any more than they have. And sure, I know that I said that about the 9900/30 at the time, but I can say this for certain now, the Q10 keyboard blows the 9900/30 out of the water, no ifs, ands, or buts. For those who are buying a phone for the typing experience, this is bar none the best physical keyboard on the market, no question. 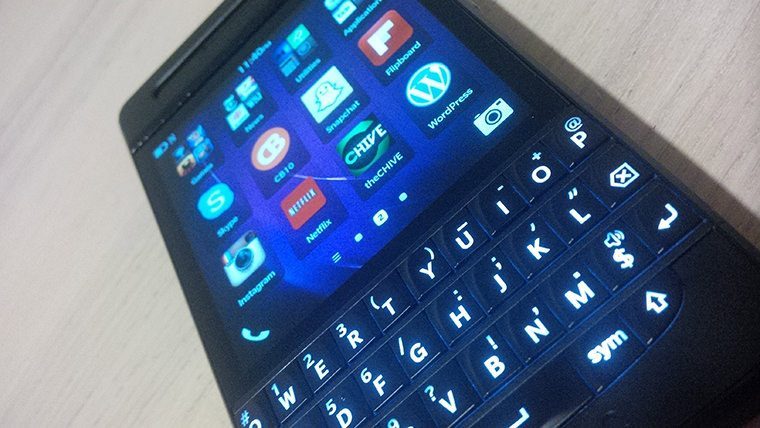 The screen is of course a tad bit smaller than it's BB10 counterpart, the Z10, but comparing the Q10 to the Z10, or any other full-touch screen phone on the market for that matter is like comparing Apples to Jellybeans to Blackberries (yeah.. I went there) ..it simply makes no sense! Sporting a nice 3.2″ screen coming in at 720×720 pixels, the display is absolutely gorgeous. So what BlackBerry decided to do here is make the screen OLED opposed to LCD, which the Z10 rocks. What this means, is that it displays better blacks, and lacks in showing true whites. The benefit to having an OLED screen though is for battery optimization. The screen can actually shut off pixels to display true black, thus saving energy, and creating less of a strain on the battery.

BlackBerry took this task head-on and made some beautiful dark themes for such Apps as the Calendar, Contacts, Remember, and others. Since the main BB10 OS is based on many blacks and blues, I can say that both of these colors stand out VERY nicely on the Q10 as opposed to the Z10′s LCD screen. The nice, bright, whites are definitely to be desired, but that's just the turnoff that OLED screens suffer from. 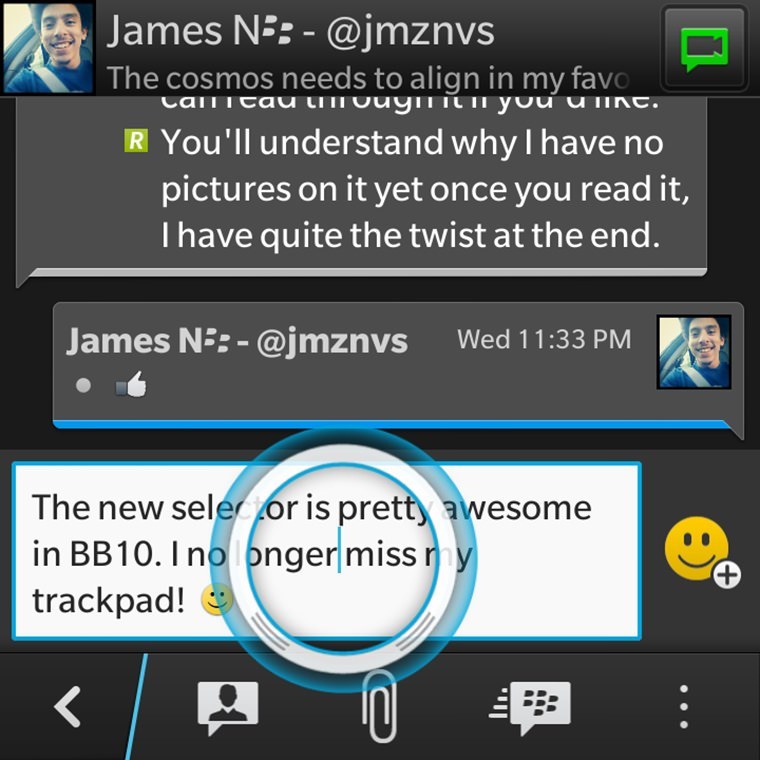 This Dev Alpha C is running OS version 10.1.0.1429, and I can comment most notably on what major changes it has from the current version that Z10 users are used to, and that's OS 10.0.1.XXX. They updated the selection tool, which is a huge plus. Before, it was not overly obvious that you could click the left or right edge of the selector and it would move one character over in the respective direction. The new selection tool makes moving the cursor around extremely easy, and I no longer miss the trackpad because of this. This is HUGE, as it was nearly impossible to imagine BlackBerry without a trackpad. I know many people were angry upon hearing about the removal of it, but I am glad to report that they did a very good job. I simply no longer miss the trackpad, and love the extra screen real estate it's removal has added.

Many people were also worried about the small bezel at the bottom, assuming it would be very difficult to minimize Apps, and access the HUB using the dedicated up and to the right swipe. I am also glad to report that this is not an issue at all! I have not once messed up the swipe, even after just using the phone for the first time. It's actually funny how natural it is, I find myself swiping up on the screen when I pick up my old Bold 9930, so that's saying a lot. 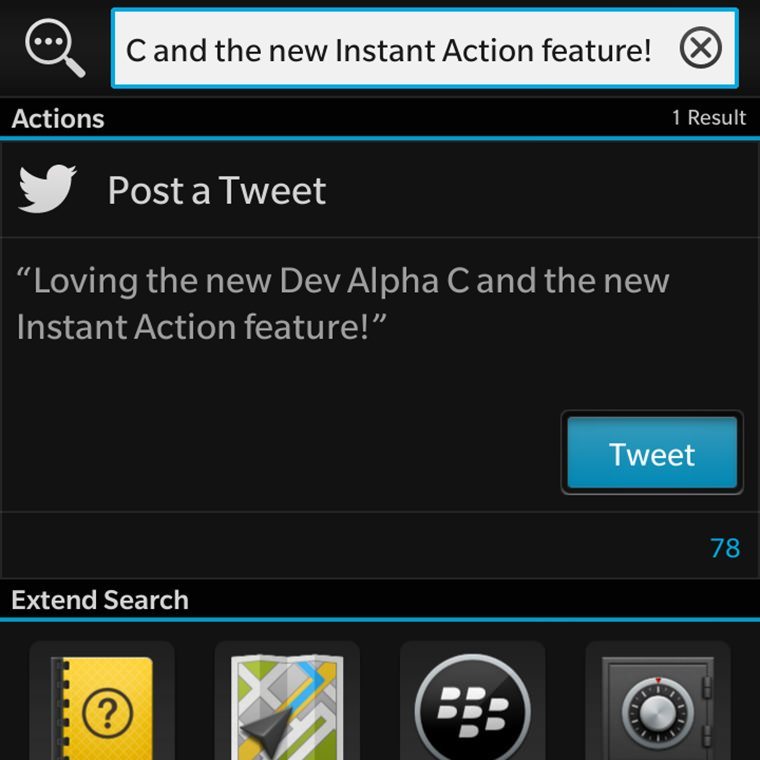 The "Instant Action" option is phenomenal as well. The fact that I can just wake up my phone and type "BBM James" and I'm instantly in a message, you simply cannot beat that speed. The awesome thing is that they went one step further with it. You can type in "Twitter" or "Facebook" and then click space, and begin typing a tweet or post. It was convenient enough being able to do it from the HUB, but being able to do it from the home screen is just that much more convenient. Things like that are what make me miss the physical keyboard over the Z10′s virtual keyboard. 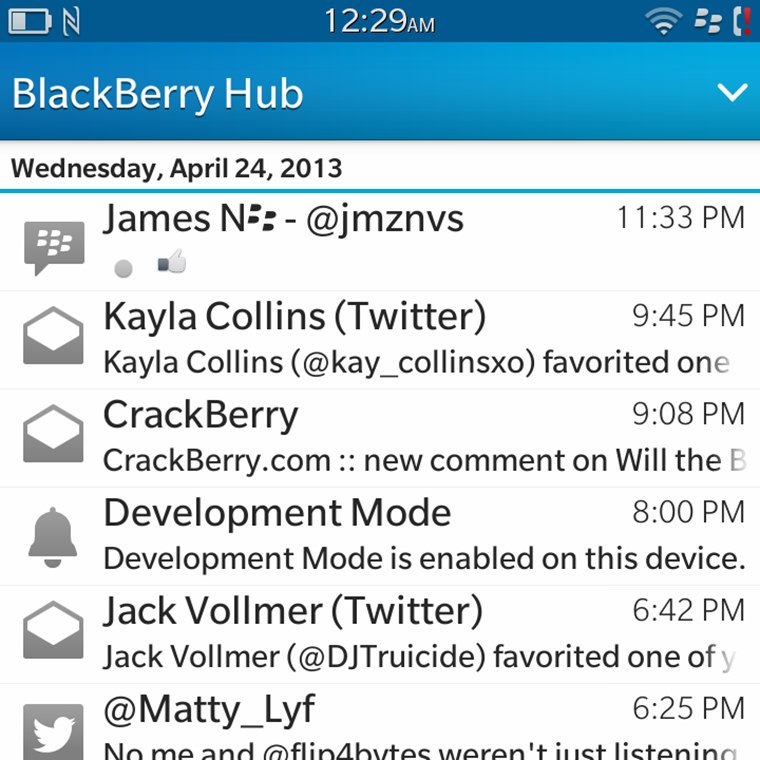 Also, in apps, BlackBerry did everything possible to allow the user to have the most amount of screen real estate possible. When scrolling down lists, it hides the bottom bar, and occasionally the top "title" bar too. When you hit the bottom of a list, it brings the bottom "menu" bar back, or if you scroll up on the list, it brings it back aswell. It's one of those features that you wouldn't really notice how useful it is until actually trying it out, but trust me, it WORKS WELL. What is even better is that if you develop your app in cascades, upon porting it over to the Q10, it automatically does the hiding menu when scrolling down along with the title bar. No extra work needed, so from a developers point of view, I just want to say thank you to the BlackBerry devs for doing that! 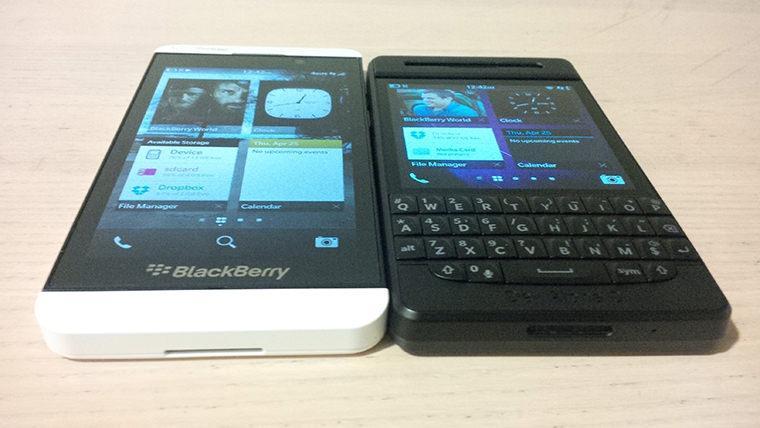 I love the Q10, and am totally torn between which phone I want to use as my daily driver.. From a developer standpoint, BlackBerry made it very easy to port your app over to the Q10, you just add in a folder labeled "720×720" and throw all of the images and QML files you need in there. Couldn't be simpler. It is difficult to explain in words how great this keyboard is, but I think I can say a sentence that may help explain my final thoughts about this phone and this keyboard.

So what is this one simple sentence and how powerful can it really be? Well, if you chose to make it this far, I guess you deserve to here it. I used the Dev Alpha C to write up this entire article, using the WordPress Android app (It's 1,600 words, if you were curious). So is that at all convincing? I'd say it is a true testament of how great this keyboard is, but you can be the judge of that. I absolutely recommend this phone to any hardcore user whose primary needs involve using the keyboard (E-Mail, SMS, etc.). As for a message to fellow developers, do not let the multiple screen sizes scare you away in developing for BB10. BlackBerry has put a TON of effort into the developer tools, and especially if you wrote the App in native code, it's almost TOO easy to port it over to other screen sizes.

I really hope this article helps give some insight from a non-bias point of view from both a dedicated user, and developer of the BB10 platform.

If you enjoyed the article, feel free to follow me on Twitter (@Flip4Bytes), I tweet often about BlackBerry related things. And stay tuned, I am heading to BlackBerry Live/Jam in Orlando, so I'm sure to be tweeting a lot and possibly throwing up another blog post or two.

Check Out Our Other Articles

Enjoy This? Let's Work Together